The Al Qa'qaa State Establishment in Iraq was a massive weapons facility 48 kilometres south of Baghdad. Covering an area of over 28 km², the site comprises 116 separate factories and over 1,100 structures of various kinds. It is now disused and many of the buildings have been destroyed by bombing, looting and accidental explosions. In October 2004, the facility became the centre of international attention after a UN agency reported hundreds of tonnes of stored explosives "missing". 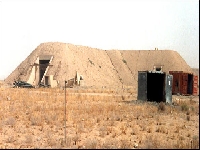